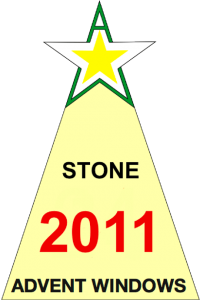 A giant community Advent calendar will be revealed day by day in Stone shop windows during December in the lead up to Christmas. The Staffordshire town is the first in the Midlands to adopt the Advent Windows idea. 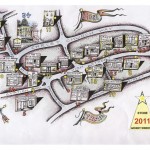 The chosen theme is Christmas Stories from Around the World. Storytellers have been trained to tell the stories at the opening of each window. Most of the stories will be opened by representatives of the nations from which the story comes. For example the King Wenceslaus story window on December 2nd will be opened by local resident Hana Plant who is from the Czech Republic.

The first window will be opened by the Mayor of Stone on December 1st and the Bishop of Stafford will open the final window on Christmas Eve after a carols and story telling walk past all the Advent Windows in the town.

An unusual window being prepared by pupils from Alleynes School will be opened on December 19th. It is about the Christmas Truce in World War I when German and British troops sang carols and played a football match. This window will be opened by Stoke sculptor Andrew Edwards. Andrew’s work has included football heroes Sir Geoff Hurst, Gordon Banks and Sir Stanley Matthews as well as figures from the civil rights and peace movement Frederick Douglass and Muhammad Ali while three of his current projects connect the first world war and football.

All the windows will be opening at 11am with the exception of Radford Gallery on December 20th which will open at 10:30. The full programme is listed below

A Little Bit of Stone

Tweets by CChurchStone
Website and Content © 2017 Christ Church, Stone based on the IT Consultant Theme © 2016 | by SKT Themes